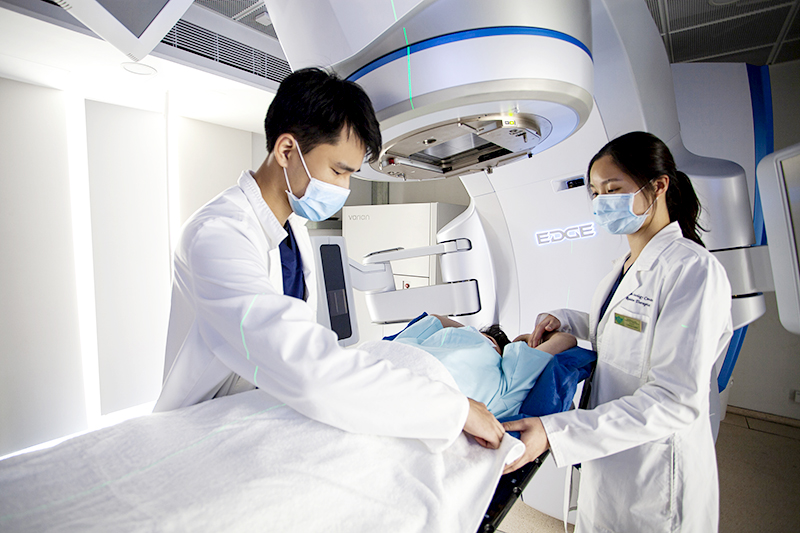 Radiotherapy is a procedure to treat disease using radiation. Radiation provokes DNA damages in cancerous cells and leads to cell death. While normal cells may also be affected by radiation, normal cells express a strong ability to repair the radiation-induced DNA damages. Radiotherapy can be used alone, or as an adjunct to chemotherapy, hormonal therapy, immunotherapy or surgery. Apart from malignant tumours, radiotherapy can also be used to treat benign tumours such as pituitary adenoma and keloid.

Linear accelerators that produce 4-25 MV high energy photon beams and electron beams are the most common apparatus for external beam radiation therapy. High energy photon beams can reach deep seated tumors such as nasopharyngeal cancer and prostate cancer. A 6 MV photon beam is suitable for most treatment applications because of its optimal penetrating power and its relatively low room shielding requirement. Electron beams are mainly applied to shallow lesions such as skin cancer.

Tumors in thoracic and abdominal regions, such as breast cancer, lung cancer and liver cancer, move as patient breathes. Additional margins are added to ensure the tumor/target coverage. However, the surrounding healthy tissues are inevitably irradiated at the same time. Respiratory motion management is therefore used to minimize the effect of breathing motion. It is particularly important in stereotactic body radiotherapy (SBRT) where extremely high dose is delivered. 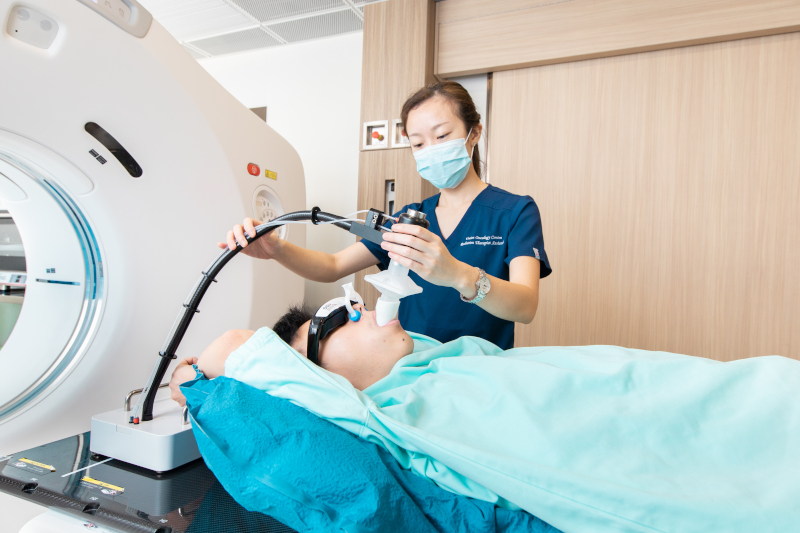 
Respiratory motion management is effective in minimizing the uncertainties introduced by respiratory motion in thoracic and abdominal radiotherapy. Different techniques may be selected based on the treatment position, size of tumor, patient’s condition and preference, etc. Please discuss with your oncologist for the most suitable option. You may also ask our radiation therapists for details.

Stereotactic Radiosurgery (SRS) is used to treat intracranial benign or malignant tumours and abnormalities. In 1951, a Swedish neurosurgeon called Lars Leksell developed SRS as an alternative to open brain surgery, in which the mortality rate could be as high as 40%. Stereotactic radiosurgery is a non-surgical radiation therapy that delivers high radiation dose to the small brain tumour very precisely. While the number of fractions in a conventional radiation treatment course ranges from several sessions to 40 sessions, stereotactic radiosurgery is a one-fraction radiation treatment. SRS is called “surgery” because it can have the same result as precise and accurate as a single open surgery. In some instances, the radiation treatment is fractionated into several days. In that instance, it is called “Fractionated Stereotactic Radiotherapy” (FSRT).


SRS can treat diverse types of conditions such as meningioma, arteriovenous malformation (AVM), malignant brain tumor, brain metastasis, acoustic neuroma, trigeminal neuralgia, pituitary adenoma, etc. Lung cancer is the leading cause of cancer deaths in Hong Kong (data from Hong Kong Cancer Registry, 2017). Due to the recent advance development in chemotherapy and targeted therapy drug, patient’s survival rate and quality of life are greatly improved. SRS then becomes an important option for treating brain metastases in patients at late stages of lung cancer. In comparison to traditional whole brain radiotherapy (WBRT), the cognitive function can be better preserved by avoiding radiation beams to hippocampus in SRS.

The “small target, single session, precise and high dose” characteristics of SRS make it favorable to traditional external beam radiotherapy as it can minimize the radiation dose to the surrounding normal brain tissues, thus reduce the side effect. Every surgical planning requires the corporation among a professional team comprising clinical oncologists, neurosurgeons, medical physicists, radiation therapists and specialized nursing staff. During the SRS, the tumour is precisely located and treated using non-coplanar high energy focused radiation beams delivered by a SRS system. SRS is like a virtual surgical scalpel, that is, patients do not have any pain feeling or any risks from general anesthesia and open brain surgery.

From the mid-90s to 2010, circular collimators were commonly used to collimate a narrow beam from a linear accelerator in SRS treatments. As the technology of image-guided radiotherapy was not mature at that time, neurosurgeons would fit a stereotactic frame over the head of the patient with pins under local anesthetic, and then locate the tumor using 3-dimensional stereotactic technique during treatment. The stereotactic frame may be attached to the patient’s head for 6-7 hours between the planning phase and the actual treatment delivery of a single treatment target. Patients with multiple brain metastases of more than 12 targets would have to experience a process with headframe attached for over 20 hours. Such long duration of frame attachment may not be tolerable for some patients. Nowadays, giving thanks to rapid developments on high resolution (2.5 mm) multileaf collimator (MLC) for intensity modulated radiotherapy (IMRT), 6D treatment couch and image-guided radiotherapy technique, the efficiency and treatment accuracy are greatly enhanced.

Recently, most hospitals have employed frameless SRS. Patients feel more comfortable as they do not have to suffer from pain and wound because of attaching headframe with pins under local anesthetic. Some hospitals also employ real-time image guided technology (e.g. Brainlab ExacTrac® from Germany), which provides real time treatment position verification to increase the positional accuracy and treatment efficiency. Sub-millimeter accuracy can be achieved by tracking patient position using two in-room kV X-ray units and optical infrared tracking system (or the latest thermal surface tracking technology) with the 6D adjustable treatment couch. The treatment time is greatly shortened to 20–30 (SRS) minutes for treating a single target. In the instance of deviations from the prescribed target position during treatment, the system will alert radiation therapist for target re-alignment by adjusting the couch before continuing the treatment.

To summarize, SRS and FSRT are useful in the management of benign and malignant intracranial lesions with its “small target, single session, precise and high dose” characteristics. Real time image guidance is complementary technology in SRS / FSRT treatments to further improve the accuracy. 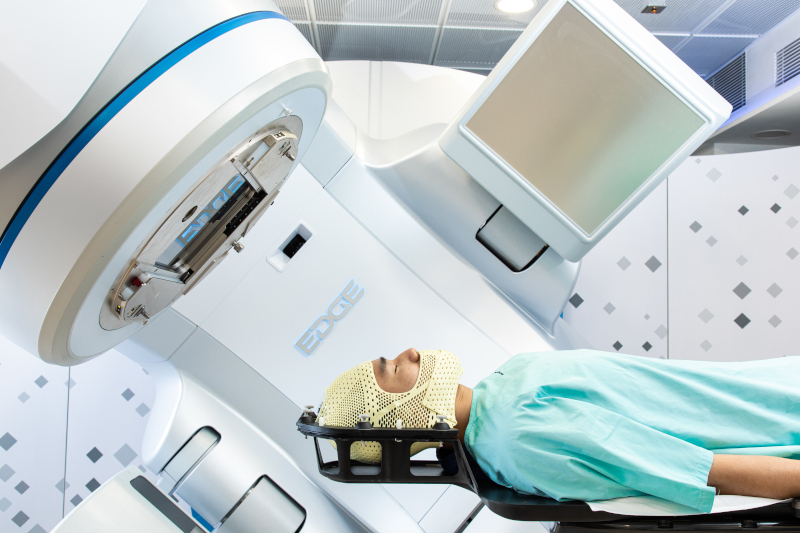 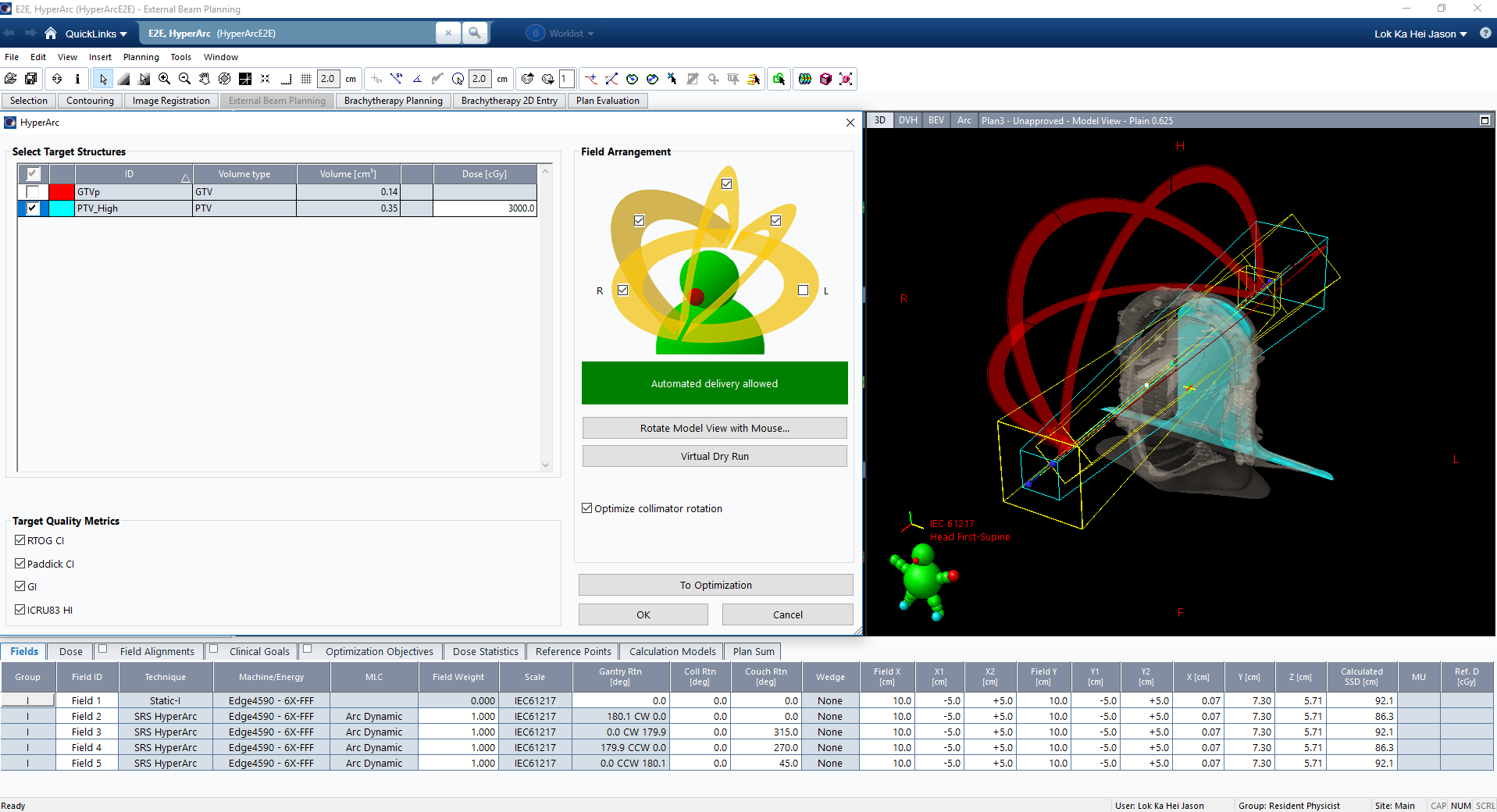 Intensity Modulated Radiotherapy (IMRT) is the most common radiotherapy technique in private hospitals in Hong Kong. IMRT is a special radiotherapy technique that controls the intensity of each radiation beamlet by treatment planning computer and multileaf collimator (MLC). IMRT optimizes the dose distributions to irregularly shaped tumours or tumours which are close to critical organs, so that the doses to surrounding critical organs could be minimized, thus treatment side effects are greatly reduced. IMRT offers dosimetric advantages over traditional radiotherapy in reducing acute and chronic side effects. For example, in the treatment of head and neck region, the doses to critical structures such as brain stem, spinal cord, esophagus, oral mucosa, tongue, parotid glands, optic nerves are highly reduced using IMRT. Moreover, it is essential for IMRT to equip with imaging modalities such as cone beam computed tomography (CBCT) to ensure treatment position accuracy. A team of well-trained healthcare professionals is also required to carry out IMRT treatments. 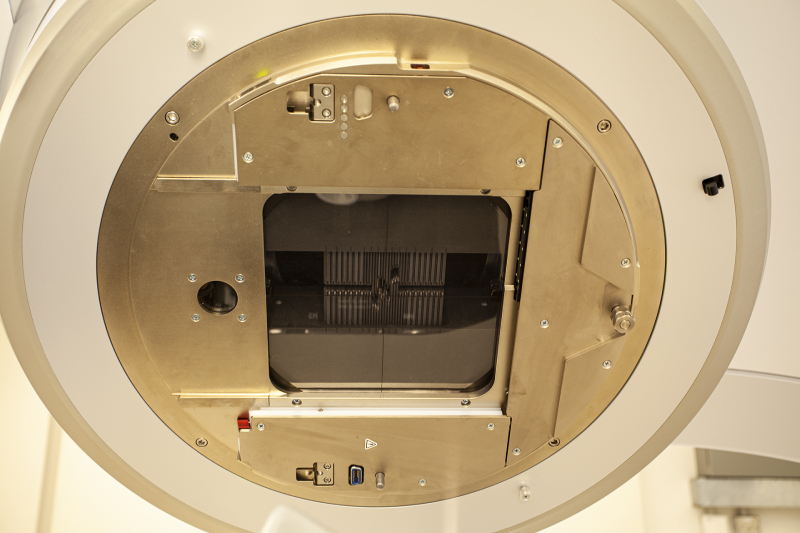 Volumetric modulated arc therapy (VMAT) can be considered as an extension of IMRT treatment technique that delivers radiation dose with varying dose rate as the gantry rotates around the patient. Varian Medical Systems introduced RapidArcTM for VMAT. The speed of gantry rotation, beam shaping aperture and dose delivery rate are simultaneously varied during treatment. Compared to IMRT, instead of gantry stopping at multiple beam angles, the treatment can be completed in 1-2 gantry rotations and the treatment time can be greatly reduced to a few minutes.

Image-guided radiation therapy (IGRT) integrates medical imaging into radiotherapy to improve localization and monitoring of tumor position, size and shape before and during the treatment, thus guides the delivery of radiation accurately.

At the beginning of a treatment session, radiation therapist will position the patient on the treatment couch according to the treatment plan with the aid of in-room lasers. Then, images are taken with an imaging system before or during the treatment. By comparing these images to the reference images taken during simulation, the patient's position and the radiation beams can be adjusted to irradiate to the tumor more precisely. Multiple images may be acquired for verification. The image guidance process is expected to take several minutes. Although it increases the total time in each treatment session, treatment accuracy can be improved with positional adjustment according to patient anatomy during treatment. In conclusion, IGRT is essential in radiotherapy treatments with high precision requirement, such as intensity modulated radiotherapy (IMRT), stereotactic radiosurgery (SRS), stereotactic body radiotherapy (SBRT). 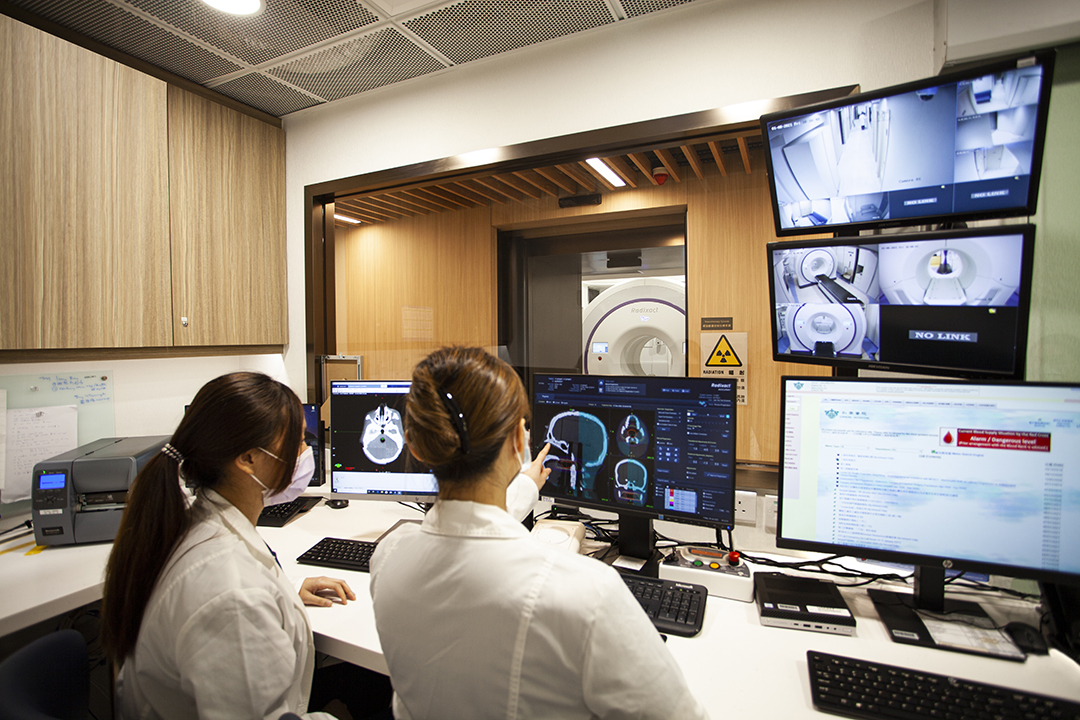 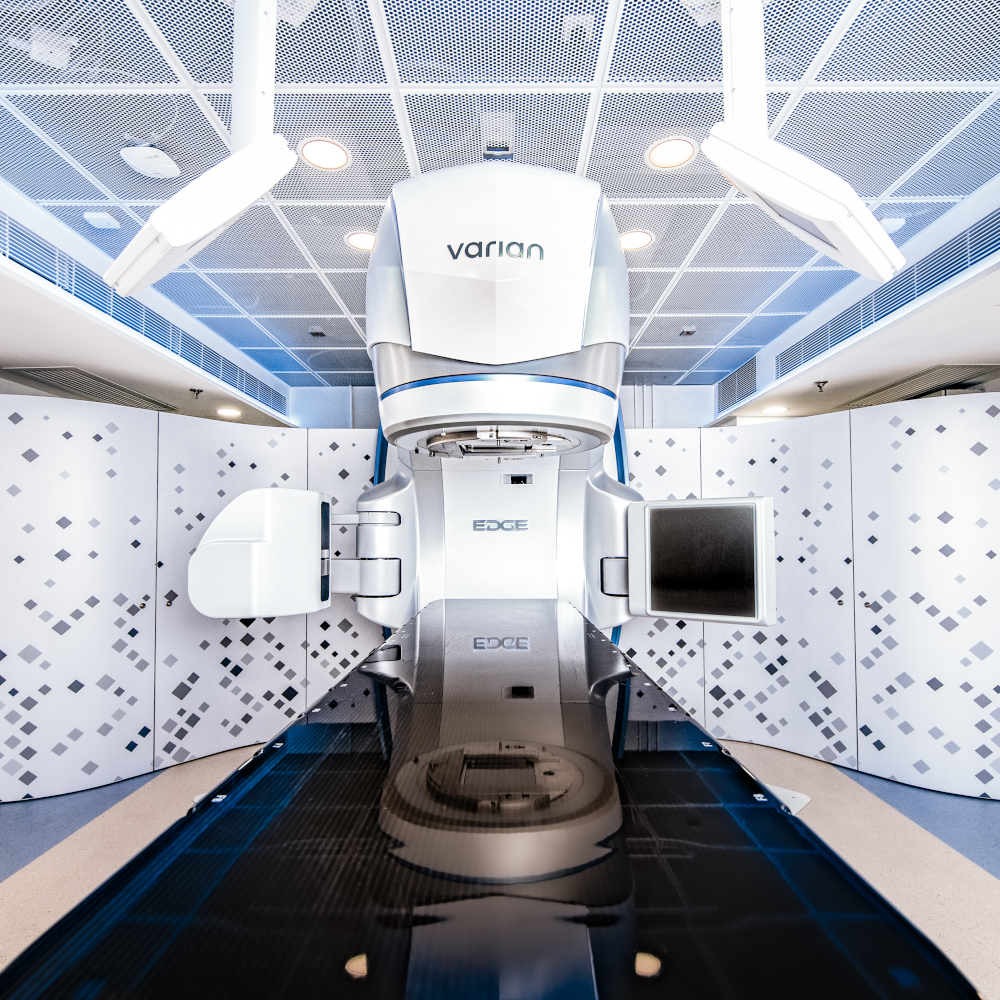 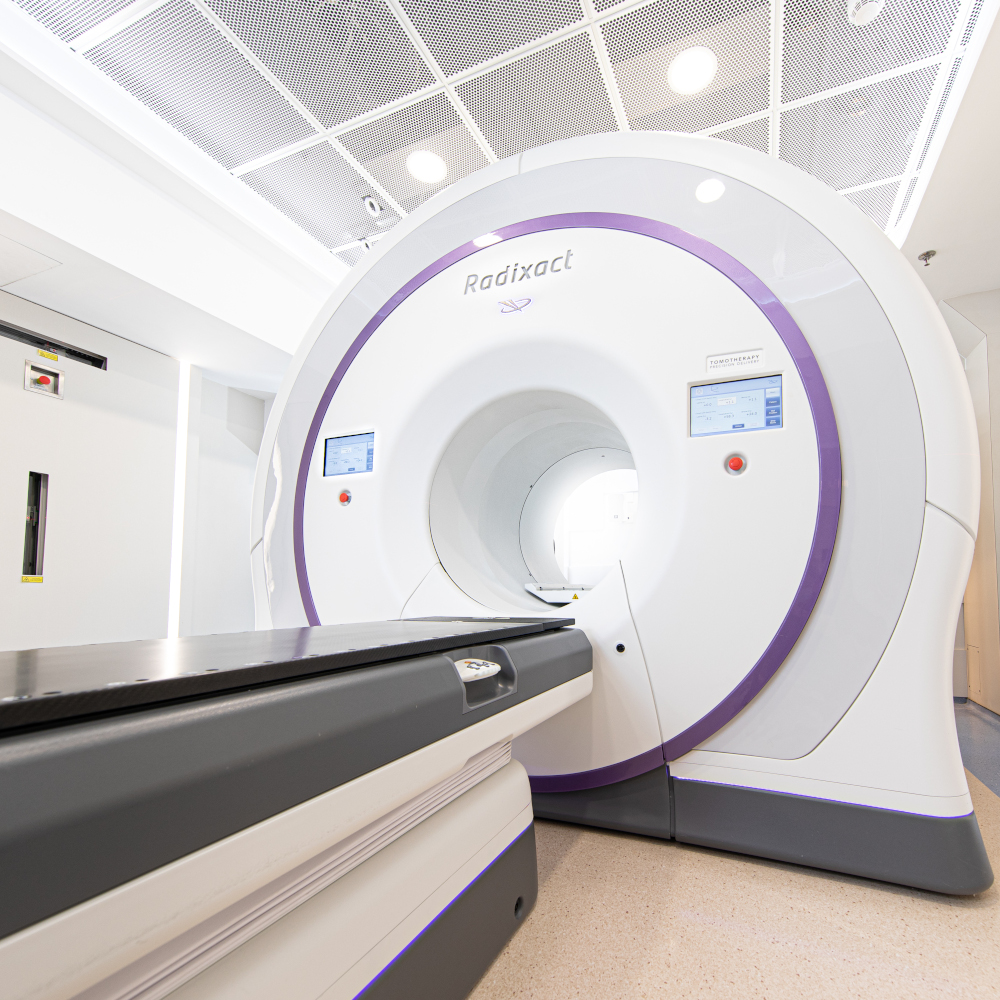 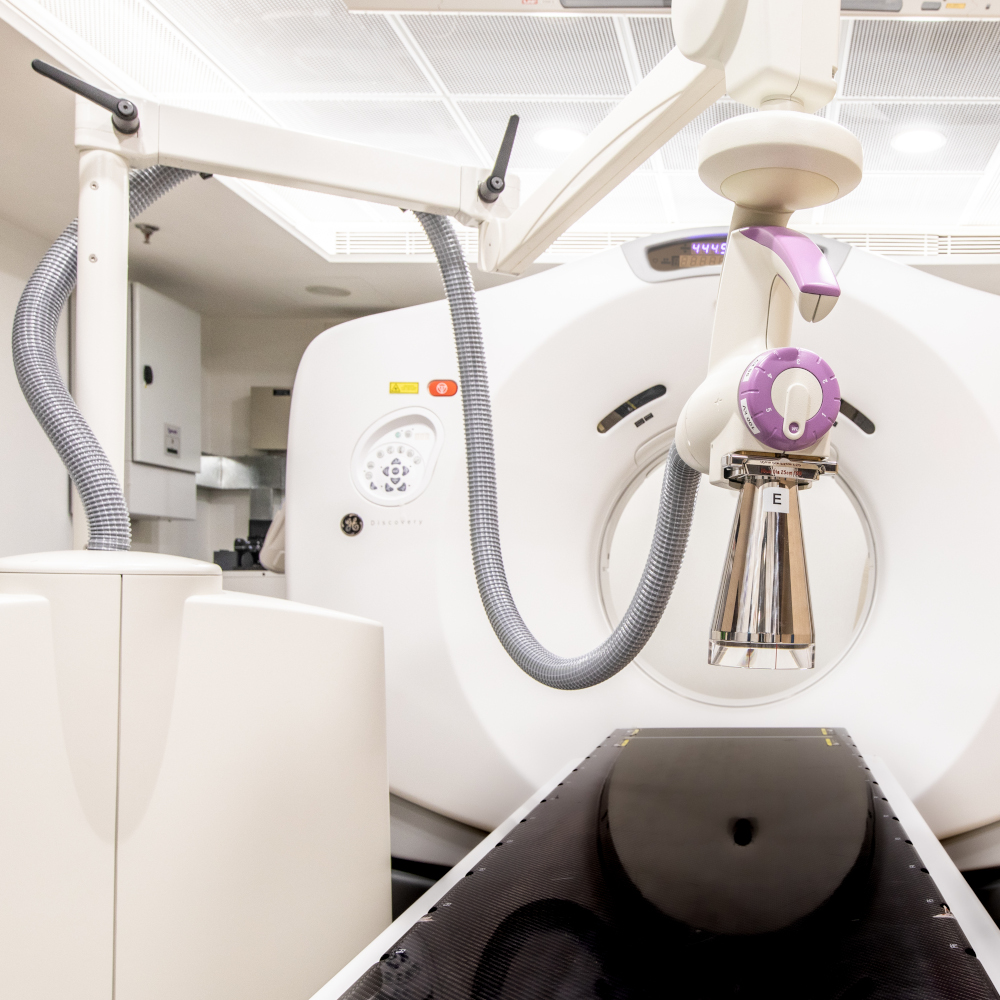 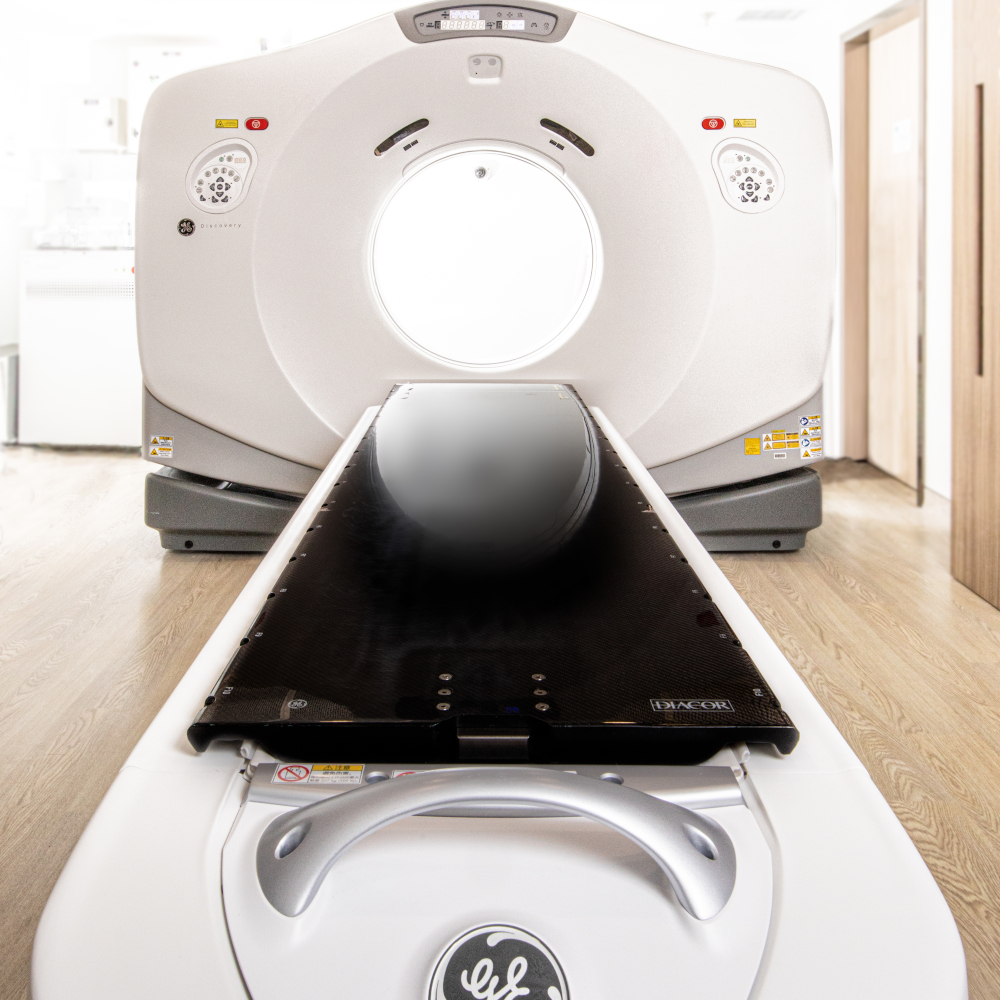 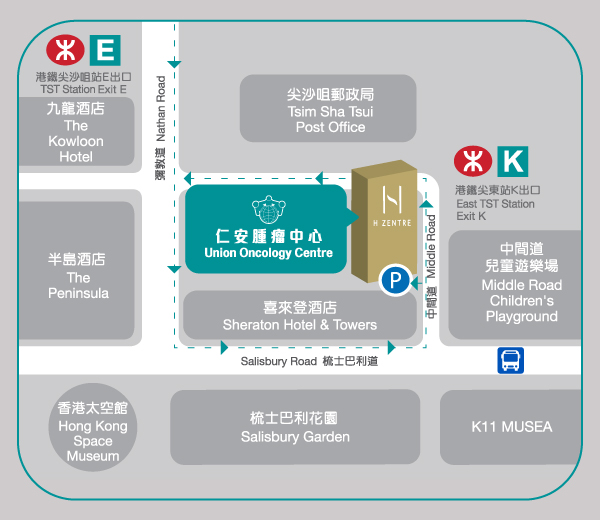